Just a short drive from Swansea, the Gower Peninsula is more than just a pretty face. It was designated as the UK’s first Area of Outstanding Natural Beauty back in 1956 and, we’re glad to say, it hasn’t changed much since! 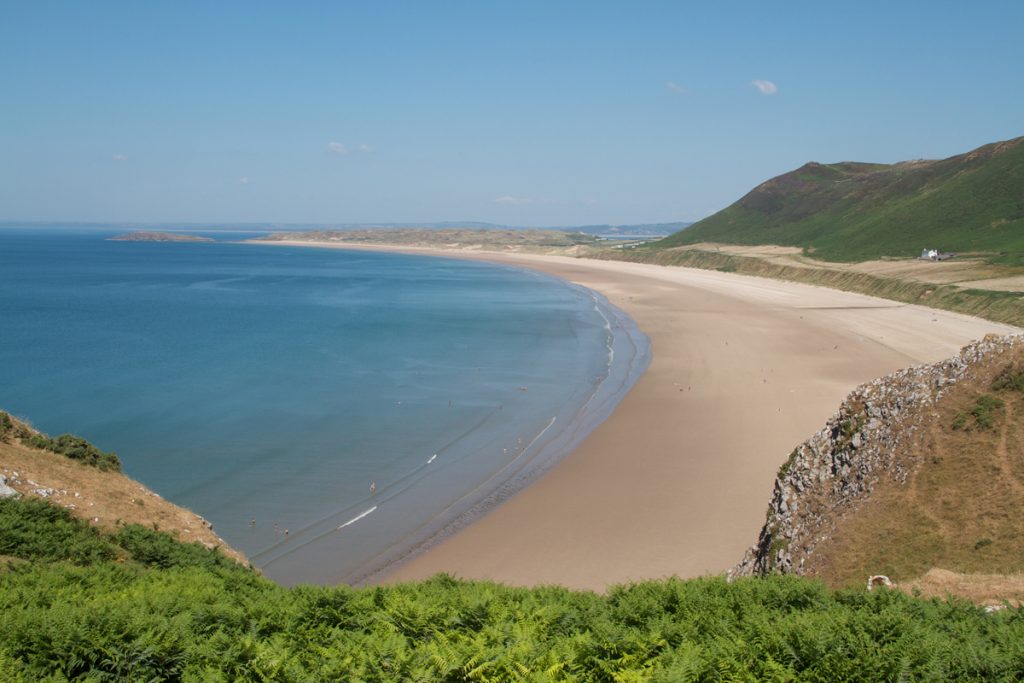 Visit the Gower Peninsula for a rich and varied environment which is breath-taking! From wild moors and limestone cliffs to golden, sandy beaches. Gower is a geological goldmine with inspiring landscapes – just look at Dylan Thomas’ work.

And the Beach Goes On
Stay on dry land, and you will be missing out! It gets some of the most awesome waves in Britain, and sandy Llangennith has been popular amongst surfers for decades. Rhossili Bay has also been enjoying some limelight on the world stage too. It has been voted Wales’ Best Beach 2017 and one of the UK’s Top 10 Beaches for five years running in the TripAdvisor Travellers’ Choice Awards AND was the first beach to be awarded Britain’s Best Beach for two years in succession!

True adrenaline junkies can try a spot of coasteering – climb the cliffs and leap into the waves below, not for the faint-hearted! Make sure you’re always accompanied by a professional though.

Coast & Countryside
The 19 mile-long Peninsula starts at Mumbles and extends westwards. It’s famous for its beautiful coastline and beaches (from vast Rhossili Bay to tiny, secluded Pwll Du), and is a favourite destination for walkers and surfers. Inland you’ll nd sheltered woodland and rolling grasslands; country pubs and fine food.

It’s no surprise that walking in Gower is so popular, its home to some of the most beautiful sections of the Wales Coast Path. Grab your boots and be prepared for a spectacular waterfront walk. It’s not all about sea and sand either – you’ll encounter lush woodlands and stunning countryside views along the way.

Sample some of the local delicacies, such as Penclawdd Cockles from the Loughor estuary, succulent Salt Marsh Lamb and the famous Laverbread (it’s seaweed!).

Outstanding Natural Beauty
Gower was awarded its AONB status for its classic coastline (much of it is Heritage Coast) and its outstanding natural environment (33% is National Nature Reserve or a Site of Special Scientific Interest).

Its mixed geology has given rise to a wide variety of scenery in a relatively small landscape area. Dramatic limestone cliffs, interspersed with sandy beaches and rocky shores, dominate its southern coast. In the north, the coast is low-lying with extensive salt marshes and dune systems.

Travel Back in Time
There are at least 1200 archaeological sites in the AONB of different periods and types. These include caves, Iron Age forts, medieval castles, churches, a lighthouse and 19th Century parks. 73 of these are of national importance, with 124 listed buildings. Gower is a true place of legends – don’t miss Arthur’s Stone, a Neolithic burial chamber located at the top of Cefn Bryn.

The western part of the AONB is included in the Register of Landscapes of Outstanding Historic Interest in Wales, for the rich evidence of a long sequence of land use and occupation from the prehistoric to industrial periods. This includes Iron Age forts and a surviving medieval open field system (known as the Vile, near Rhossili).

Rest Up & Recharge
If this article has whet your appetite, there is a wide range of accommodation in Gower; hotels, guest-houses, self-catering apartments, caravans and campsites. From the sumptuous to the simplistic, there is something to suit all tastes and budgets. To check out where to stay and what to see and do on Gower go to www.visitswanseabay.com

www.visitswanseabay.com
Images courtesy of City and County of Swansea