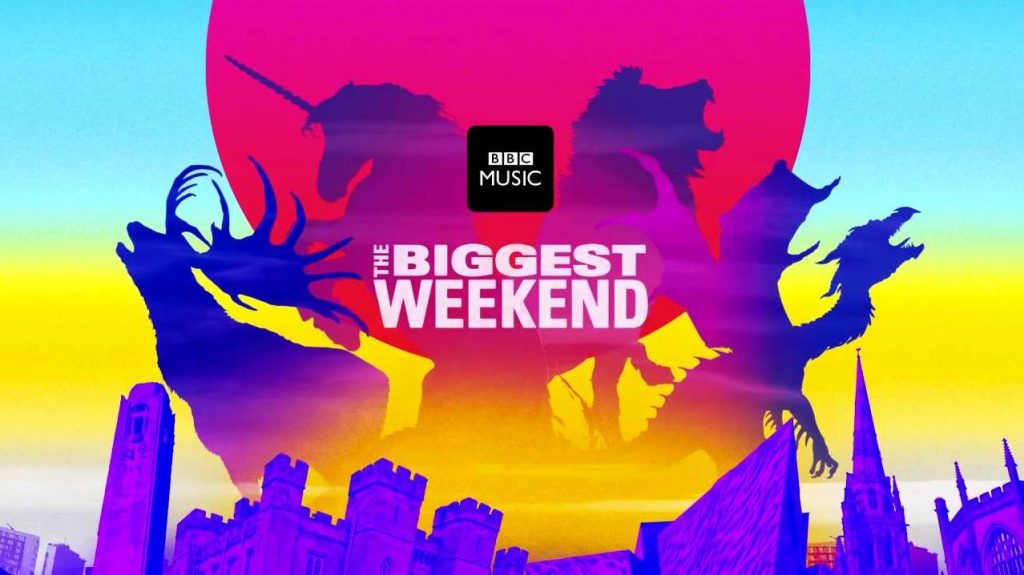 BBC TV, radio, online and mobile will cover the event across the entire weekend.

BBC Music’s The Biggest Weekend is taking place on the late May bank holiday weekend (25-28 May) over four sites in four nations across four days with over 175,000 tickets available to the public and will be the BBC’s biggest ever celebration of music across TV, radio, online and mobile.

There will be performances from the biggest and best-loved names in music celebrating the incredible breadth and diversity of live music on the BBC. Those confirmed for the line-up are:

Ed Sheeran says: “So excited to be part of The Biggest Weekend this summer! I’ve always loved performing at Big Weekend with Radio 1 and this year it’s going to be even bigger. Bring it on Swansea!”

Manic Street Preachers say: “The Biggest Weekend is in Belfast, which is good in itself. We’ve played there a lot over the years, we did one of the greatest gigs ever there back in The Limelight in 1990. And then we’ve had subsequently just lots of great gigs there, just amazing ones. It is good to spread 6 Music’s message far and wide.”

Public Service Broadcasting says: “We’re absolutely delighted to be part of The Biggest Weekend in Belfast – it’s an honour to be part of an event like this and a special honour to be asked by the BBC to compose some new music specifically about the Titanic and perform it in front of Titanic Belfast. We really can’t wait and hope to see as many of you as possible in May.”

Nigel Kennedy says: “I’m inspired by all kinds of music from across the world. I’m also inspired by people and by passion. Music should not be pigeon-holed and I have always believed that. So it’s great to be involved in an event which celebrates diversity across live musical genres with artists new and old. In Perth, I’ll be performing Bach and Gershwin with the BBC Scottish Symphony Orchestra and in Coventry, Highlights of the New Four Seasons and Hendrix with the BBC Concert Orchestra.”

BBC Music’s The Biggest Weekend is a truly unique event with concerts being hosted by BBC Radio 1, 1Xtra & Asian Network, BBC Radio 2, BBC Radio 3 and BBC 6 Music. Over the weekend, there will be extensive TV coverage on BBC One, BBC Two and BBC Four and sets will be available on BBC iPlayer, mobile and online. The scale of coverage will replicate that of Glastonbury festival on the BBC, allowing audiences at home to enjoy all of their favourite acts as well as discover brand new music.

Tickets for The Biggest Weekend go on sale on Monday 12 February, priced at £18 plus £4.50 booking fee. The booking process will be handled by Ticketmaster – the only official ticketing agent for The Biggest Weekend. There are over 175,000 tickets available to the public and tickets will be geographically weighted with a percentage available to each of the local areas. For more information about tickets, please go to www.bbc.co.uk/biggestweekend.

Bob Shennan, Director BBC Radio and Music, says: “The Biggest Weekend is going to be a once-in-a-lifetime festival for everyone that loves music, whether they are at the venues in person or enjoying the whole spectacle of performances being streamed through iPlayer along with all our TV, radio and digital networks. Wherever you are in the country, you will be part of the biggest music event, with the widest selection of musical genres, the BBC has ever put on.”

The four locations, dates and artists confirmed are:

Nick Grimshaw, BBC Radio 1’s breakfast presenter, says: “You know it’s the start of the summer when we put on a massive festival, and we’re bringing two of the biggest artists in the world to Swansea. Taylor and Ed plus a whole massive line-up to be announced make The Biggest Weekend THE event of the year.”

Chris Evans, BBC Radio 2’s breakfast presenter, says: “The Biggest Weekend is shaping up very nicely indeed. Can’t wait to find out who else is going to be performing.”

Petroc Trelawny, BBC Radio 3’s breakfast presenter, says: “There’s magic in all kinds of music, from pop to rock, jazz to folk and of course, classical. I’m really looking forward to The Biggest Weekend and the unique and brilliant content of four BBC radio stations coming together – it’s thrilling to see a collaboration like this on such a grand scale. With Nigel Kennedy and Eliza McCarthy at the helm of the Radio 3 offering, I’m convinced the festival will be a treat for existing and new audiences alike. I can’t wait to hear who else will be joining us on stage in Perth and Coventry in May.”

Shaun Keaveny, BBC Radio 6 Music’s breakfast presenter, says: “I am a Belfast virgin, so am absolutely chomping at the bit to immerse myself in the culture of one of Britain’s great cities when BBC Radio 6 Music visits for the first time for BBC Music’s Biggest Weekend. 6 Music will be bringing a superlative line-up of artists – with Beck, Manic Street Preachers, Courtney Barnett and Public Service Broadcasting announced today and more to come.”

Also part of The Biggest Weekend, BBC Radio 1, BBC Radio 2, BBC Radio 3 and 6 Music will work with BBC Nations TV and Radio, as well as local radio stations, forging partnerships to put on a comprehensive range of outreach activity in the lead up to the festival including educational workshops, Q&A’s, Radio 1’s Academy, Ten Pieces Assemblies and BBC Music Introducing gigs showcasing local talent in each host location.

The BBC is working closely together with the local councils, communities and businesses in the four UK cities to bring you The Biggest Weekend.

Further information will be announced in due course.